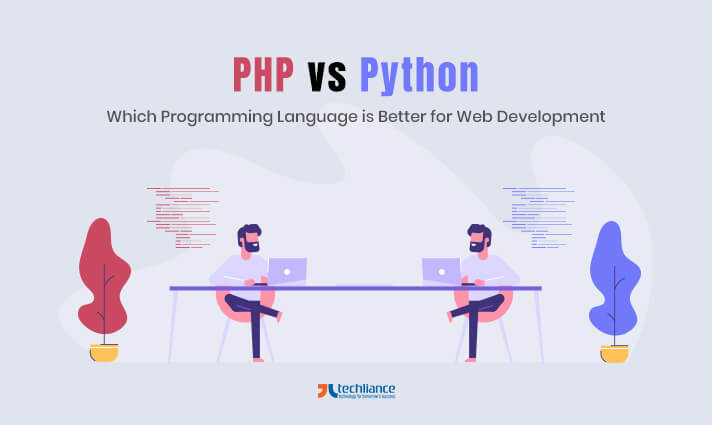 Choosing the right web development language can be confusing. You can choose from PHP, Java, Ruby on Rails, and Golang. However, which of these programming languages is the best?

Among the several programming languages, PHP is one of the most popular ones. It’s a scripting language, which means it can generate dynamic web pages. It’s also a great way to build scalable and secure web applications.

PHP is used for all kinds of web projects. For instance, you can build a social networking site, an eCommerce platform, or even a desktop application. It’s not just for websites though; PHP has a booming community of developers. You can find a wealth of tutorials, documentation, and reference material on the Internet.

PHP is also very easy to use. Its syntax is straightforward to understand, and it’s also relatively fast. There are some disadvantages, though.

PHP isn’t always a perfect fit for every project. For example, it’s not the most ideal language for machine learning.

Python is another language that is gaining popularity. It’s a powerful, open source programming language that has numerous benefits. For example, it’s compatible with HTML, making it a good choice for web development.

In addition to that, it’s easy to implement. It has a wide variety of libraries and frameworks.

The best part is that PHP is also very portable. It can run on most operating systems, including Windows, Linux, and Mac. It’s also compatible with all the major web servers.

While it’s not the fastest language around, PHP does a better job of the same thing. It can send emails, cookies, and send files to a server. It’s also very scalable, and can be used to store database information.

The best part is that you can install it for free. It’s easy to learn and it’s a lot more efficient than other languages.

Object-oriented and scalable, Java is an excellent choice for web development. It provides a high level of platform independence, which means you can write code and run it on all the different operating systems and devices. It also offers a simple syntax that is easy to understand and use.

With millions of libraries available, Java is an ideal language for a wide variety of applications. It supports many programming paradigms, and it has first-class integration with C and C++.

Java is one of the most widely used programming languages on the planet. It is used in desktop, web, and mobile apps. It is considered one of the most stable and versatile languages in the world, and is great for beginner developers.

With a high degree of scalability, Java is a reliable option for any size project. It is also a budget-friendly language. There are many free online tutorials that can help you learn how to use Java.

Another reason that Java is one of the best web development languages is its popularity. There are more than 9 million developers using it worldwide. It has become an essential part of enterprise applications.

A large number of Fortune 500 companies have developed back-end applications using Java. These companies include Netflix, PayPal, and Uber.

It is a powerful programming language that can be used to create complex websites. It is ideal for web developers because it is easy to learn. Despite its popularity, it is predicted to lose its place on the list of best web development languages.

The Java Virtual Machine (JVM) enables Java to work on different platforms. The standard JDK includes over 200 built-in packages that allow you to build and run your applications on a wide range of platforms.

Among the many programming languages, Golang is a great choice for web development. The language is very easy to learn, has great performance and comes with a large community of developers.

The language is known for its multi-core capabilities, allowing apps to take advantage of the architecture of a multi-processor computer. This results in faster computer performance and less idle time.

Golang also supports concurrency, which allows several tasks to run at the same time. This is especially useful when a web application receives a high volume of requests.

The standard library includes the net/http package, which contains functions for working with the HTTP protocol. It is also possible to implement a custom interface for your web applications.

In addition to these, the language has a garbage collector that keeps memory usage in check. This feature is particularly important when developing web applications, as it prevents memory leaks.

Another good thing about Golang is its ability to handle millions of requests per month. This is important for businesses that rely on prompt server responses. Moreover, it’s easy to develop web applications with this language, as there is no need to install extra frameworks and libraries.

Some of the most popular cloud platforms, such as Google, Dropbox and Uber use Golang. These companies need to scale quickly when they have a rapidly growing user base.

However, if you have a solid foundation in Java or C, it’s easy to get started with Go. Using the right framework and libraries, you can write efficient web applications.

Ruby on Rails is a popular language for developing websites and web applications. It offers great flexibility and speed, along with scalability and security. It is also very readable and easy to understand. It is a general purpose language that is compatible with many different types of web apps. It is especially useful for e-commerce applications and SaaS applications.

A lot of web frameworks use the MVC pattern, which separates the logic of the app into three sections. The Model represents the data objects, the View is the visual representation of that data, and the Controller responds to user input.

The code is modular, which makes it easier to read and debug. It’s also more secure, which protects your application from SQL injections, cross-site scripting, and other attacks.

The Rails framework is very flexible and allows websites to adapt to business processes. It has a wide library support, which makes it a good choice for new and existing applications. The language also has excellent automated testing tools. The RSpec unit testing setup allows users to test functions separately, which helps to ensure that the application has been tested properly.

The Ruby on Rails community is extremely active. It includes a vast library of open source code and has a large community of developers, as well as conferences, recruiters, and other resources. The developers in the community share their work with each other.

Ruby on Rails is a good choice for web development because it has a simple programming paradigm and offers good security and scalability. It also makes it easy to change and migrate code.

Choosing between TypeScript and JavaScript is a difficult decision, and is best made based on the type of project you’re working on. Smaller projects may be more suitable for JavaScript, while larger projects and projects with multiple developers are better suited for TypeScript. It’s important to consider your project’s characteristics and your customer’s needs before choosing between the two.

One of the most useful features of TypeScript is the type checker. This tool ensures that values are given the right types, and that your code is free of errors. It’s also a great tool for catching errors in large codebases.

Another important feature of TypeScript is the auto-completion function. This means that the compiler can provide you with reliable suggestions on where to write your code. It can also help you determine the correct outputs and inputs for functions.

TypeScript has a well-documented typing system, which makes it easy to understand. It’s also easier to refactor and maintain. It’s a good choice for large applications, but it can also be difficult to implement.

It’s not the perfect solution for test-driven development, as it doesn’t support it. It also doesn’t have the same community as JavaScript. However, the type system is a good example of how modern tools can allow developers to reason about their code.

The code is also relatively comprehensible, but it requires frequent upgrades. It’s also important to remember that TypeScript isn’t a replacement for JavaScript. It’s a different language with its own advantages and drawbacks.

Aside from being strong and robust, TypeScript is also a good tool for automated software testing. It allows developers to know when their teammates have made mistakes in their code. This helps improve team performance and productivity.